The following information is from the books, "Peachland Memories", compiled by the Peachland Historical Society, and we thank the Society for permission to use excerpts from those books.

Olive B. (Gummow) Clarke, a student of Charles Elliott, said....

This little building was a really important place in the village. All public meetings were held there, we saw our first Santa Claus and Christmas tree, took part in our first Christmas Concert.

When dignitaries from Victoria or elsewhere came to town, the schoolhouse was used for evening meetings. The desks would be pushed back against the wall and the next morning the children noticed the smell of cigar and cigarette smoke lingering in the building.

Mr. Elliott was a splendid community man. He had a fine tenor voice, a splendid sense of humor and was a good mixer in all the small doings at that time. There were regular spelling bees and challenges to bring in the first spring flowers which were labeled with the finder's name and posted in the room. Young girls' long hair found its way into the ink wells of the boys' desks behind them. On Friday afternoons we always had something special -- a book of our teacher's choosing, an exciting story from a paper, music, riddles and jokes. But best of all we enjoyed a spelling bee.

In the earliest days, the little one-roomed school (white, not red) was really the center of our lives. It sat in the middle of a gravel bed and everywhere one looked there was gravel, gravel, gravel. How we managed to play in that gravel, I will never know. We held church services and Sunday School in that little building. The Pioneers met once a year when the desks were pushed against the walls and our teacher, C.G. Elliott was MC and also read a very witty paper called "The Peachland Pioneer". There were a couple of reflector lamps on the walls, and a lamp or lantern on the teacher's table.

The big boys played football and we always had a girls' baseball team in action as well as a boy's team. The diamond was not perfect, the bases not quite correctly placed nor the outfield players in their proper places, because we used trees for bases and could not move them but we had wonderful fun just the same. At first the boys made the bats from the limb of a tree, smoothed as well as possible and many a ball we made with a round stone for a center and then wound with miles of string or layers of cloth and a piece of leather sewed on for a cover.

In the year 1908 the new school was built and about this time we also got town water and electricity. We already had telephone. Very early there had been tap water which came from a huge tank up behind the school. There was a stand pipe in the old school yard and when that system dried up we depended on the lake. At school we had a pail and tin cup and each morning we filled a small bottle to use for washing our slates during the whole day. 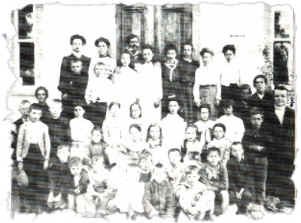 Class picture taken in 1903 at the front of the Schoolhouse, which shows the doorway in the middle between the two windows. The woman back left is Annie Seaton. Charles Elliott is at the back. See page 55 of the book, Peachland Memories, Volume One for a better look.

It was Thanksgiving Day, 1898 when the Elliotts and others arrived by boat. A Thanksgiving supper was in progress and the 20 new arrivals, tired as they were from their long trip, enjoyed the bounteous repast and stayed to listen to the concert which followed. A feature of the days after the arrival of the Elliott brothers, Charlie and Jim, was the reading of a hand-written publication called "The Peachland Pioneers", with Charlie Elliott the humorous editor-in-chief. Charlie Elliott was the first school teacher, too, but was an energetic horse trader on the side. His pupils of those days often amused themselves at will as he stood on the school steps and talked horses with some of the Indians.