To legally cut a Christmas Tree, A Free Use Permit must be obtained. The permit holder then may cut a tree on an old Road Right of Way or from under a power line. The permit may be obtained from the Penticton Forestry office 250.492.2200 or from the Kelowna Forestry Office at 250.861.7634, or go to the Ministry of Forest website for information and a downloadable Christmas Tree Free Use Permit at Ministry of Forests 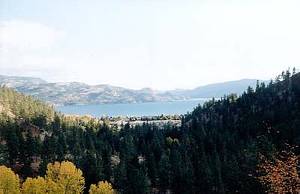 July 21, 2009
There is an increase in white moths in the watersheds recently. These are Douglas Fir Tussock Moths and we are currently experiencing an outbreak of the pest in the Okanagan, Similkameen and Kamloops areas. We have had similar outbreaks previously, back in the 1980's. Here is the link to the Ministry of Forests and Range website that is recommended for more details: Douglas Fir, Tussock Moth

Basically the pest is a defoliator. It eats the fir needles. Trees can usually withstand one attack but may die after two or more consecutives years of attack. The top 1/3 of the tree is typically defoliated and will die but if the tree survives it eventually grows a new top. 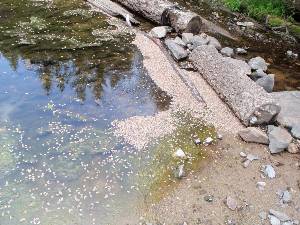 The above photo was taken in one of our local watersheds and indicates the accumulation of dead moths in a stream. This pest is not as serious as the pine beetle but it is just one more pest that is damaging the stands in our watersheds.

July 21, 2009
The Western Spruce Budworm attacked spruce and fir on ~800,000 ha in the interior in 1987. It is also on the increase again and can cause serious damage to the spruce in the wet zones along creeks and in the spruce stands in the upper elevations of many of our watersheds.
Copyright © 2023 District of Peachland | All Rights Reserved
Last Updated: May 14, 2019 - 135    login
▲